You are here: / Why franking credits are important for retirees

Why franking credits are important for retirees

Many of you will have seen the term franking credits appear on your share dividend statements, but what does a franking credit actually mean and how can investors benefit?

What is a franking credit?

When an Australian-listed company posts a profit, it is standard practice to redistribute those profits to its shareholders in the form of a dividend. As the profits have already been subject to Australian company tax of 30 per cent the shareholder is entitled to a rebate (partial to full) from the ATO for tax already paid if the individual’s marginal tax rate is less than 30 per cent.

On the dividend statement, the company tax paid is referred to as a ‘franking credit’.

In the case of retirees that pay zero tax, franking credits are 100 per cent refundable, which means they can significantly boost the returns for pension phase superannuation funds.

The importance of franking credits for retirees

Figure 1. The after-tax value from a $1 dividend franked vs unfranked for different Australian investors. 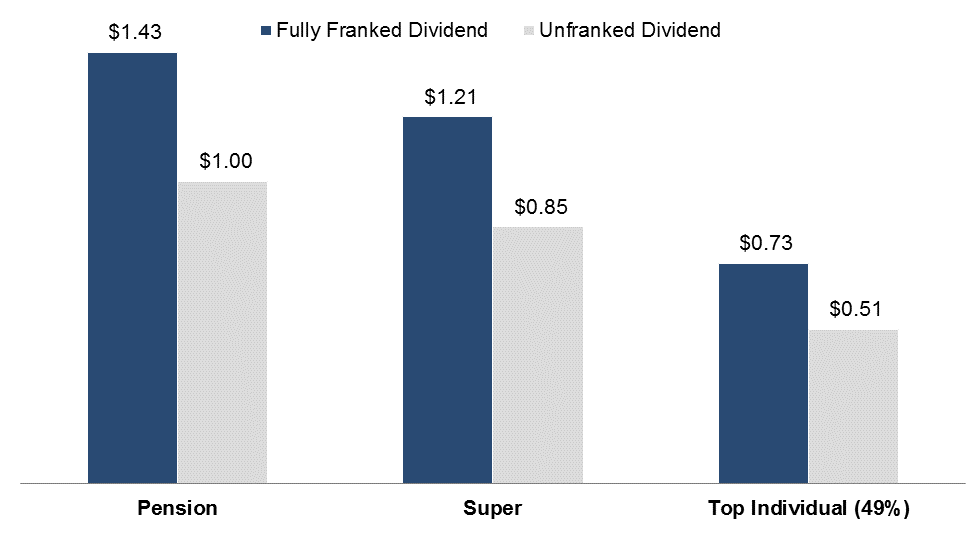 How large is franking?

In Table 1, we compare the performance of the standard S&P/ASX Accumulation Index with that of a  new ‘tax aware index’ which fully values franking from the perspective of tax exempt investors such as charities or pension phase investors. The additional returns from franking credits are close to the current cash rate and when accumulated over 3 years add an extra 7.2 per cent to returns.

Table 1. Australian shares performance before and after franking

As you can see, over time franking credits can have a significant impact on your returns, in particular for those in pension phase and other tax-exempt investors. Therefore, for retirees and those nearing retirement, you need to understand the benefits of franking and how you can structure your investment portfolios to maximise your after tax outcome.